Contributing Editor Carl Unger believes that every trip is worth taking. He loves an extended trip to Europe as much as he enjoys exploring the towns and landscape near home. Basically, you'll find him wherever there is good food, fresh air, and plenty of stories to bring home.

Carl has been writing for SmarterTravel since 2005. His travel writing has also appeared on USA Today and the About.com Boston travel guide.

The Handy Item I Always Pack: "It's not revolutionary, but a small Moleskine notebook is my one travel must-have. It's great for noting things you want to remember and it takes up hardly any space in your bag."

Ultimate Bucket List Experience: "Japan. I'd love to take a month off and visit the cities, temples, and countryside. I'm fascinated by the country's juxtaposition of ancient traditions and modern ambitions."

Travel Motto: “Why do you go away? So that you can come back. So that you can see the place you came from with new eyes and extra colors. And the people there see you differently, too. Coming back to where you started is not the same as never leaving.” –Terry Pratchett

WalletHub is out with a list of what it considers the Best Frequent Flyer Programs for 2019. Because the term “best” is usually relative to the traveler, lists of this kind can range from useful to clickbait. WalletHub’s version seems to be the former; it includes substantial data points and even an interactive calculator where travelers can enter their travel budget to find the best option for them.

The survey ranks the 10 largest domestic airlines based on 23 key metrics, ranging from the breadth of the airline’s route map to the ease of attaining elite status to the airline’s fees. The methodology is quite extensive, (which we’ll get to in a moment).

Can You Sell Frequent Flyer Miles?

As for that list, here are the WalletHub rankings.

WalletHub helpfully silos its data into three of traveler types, based on average annual airfare spend: Light ($527 per year on airfare), Average ($3,880) and Frequent ($7,232). WalletHub also has a calculator that will list the top two programs for you, based on your personal spending habits: 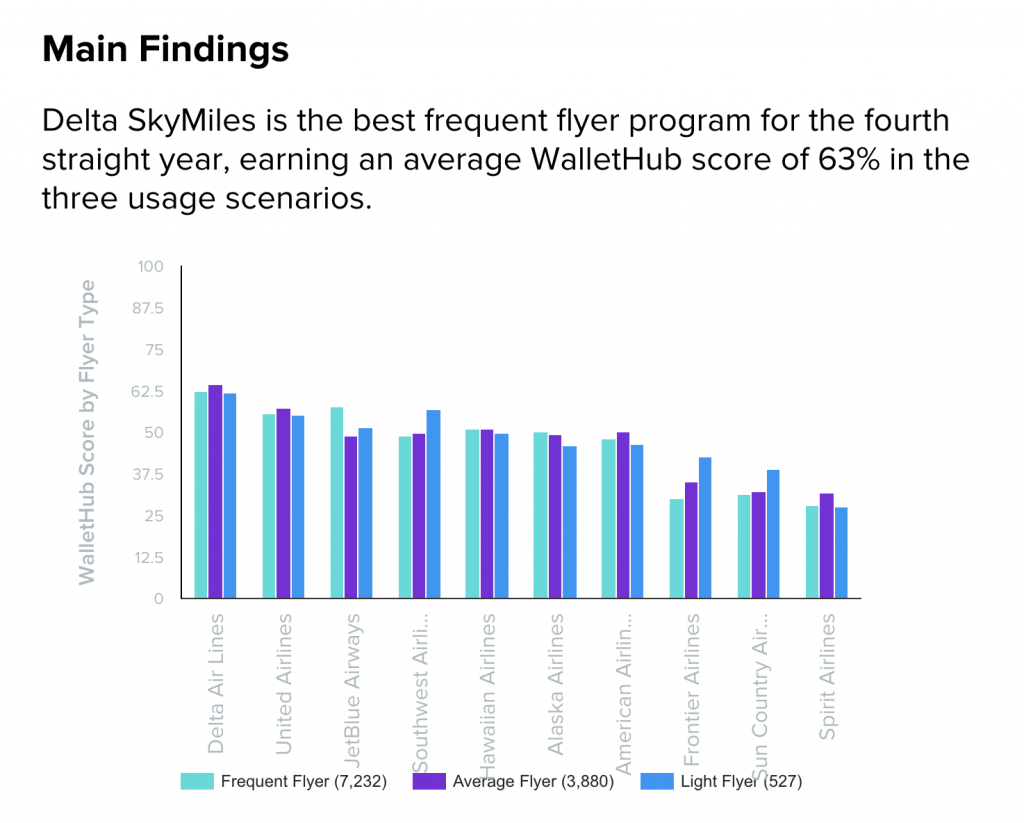 There are a few data points that really jump out from WalletHub’s research. First, only three airlines (JetBlue, Frontier, and Hawaiian) are offering more rewards value in 2019 than in 2018, which is calculated as the value received per $100 spent. Hawaiian leads that category, returning $21.29 for Frequent travelers, $15.97 for Average travelers, and $10.64 (a statistical tie with Frontier) for Light travelers. Second, Delta and JetBlue are the only airlines whose miles don’t expire due to inactivity. Conversely, eight of the ten airlines have no blackout dates.

Third, and of no surprise to anyone playing the mileage game, “airline miles cost an average of 61 percent more than they’re worth when purchased rather than earned.” And another “no surprise” is that Spirit is the worst on this metric, with a 72 percent markup on its purchased frequent flyer miles. Southwest is the “best” option, with a 44 percent markup on purchase miles; JetBlue is another outlier, with “only” a 51 percent markup.

There’s a lot more information in the full report, so it’s worth reading whether you’re enrolled in a program or considering it.

Readers: What is your preferred frequent flier program? Or have you stayed out of the points/miles game?