This ship is built for the journey. The waters are shallow here on Myanmar’s upper Irrawaddy River, and ever-shifting sandbars constantly reinvent the wending path downstream. Only fishing boats, barges, and a few small ships designed for shallow-water sailing ply these waters. Built locally, the Avalon Myanmar is one such ship.

As a guest aboard the ship on one of its first journeys downriver, I got a rare peek into this little-known stretch of the world’s second-most isolated country. These are hard places to get to. The roads are challenging, the airports few; but the river weaves a story of place, offering a look at a world that—for better and worse—won’t remain the same much longer. Here’s what makes it an exceptional journey right now.

Even in off-the-beaten path Myanmar, there’s a tourist circuit. This isn’t it. The northernmost point on the Avalon Myanmar’s itinerary is Bhamo, a small town near the China border. Embarking this far north, along a wild stretch of the river, gives you the chance to see a wonder few outsiders have ever witnessed: the Irrawaddy’s Second Defile, a dramatic passage between soaring limestone cliffs, past hillside monasteries, and along vast swaths of undisturbed forests.

The treasure-chest of untraveled wonders continues as the ship heads downstream—to riverside villages, where the small group mingles with locals; and into farming communities, jungles, and monastic settlements. It’s only once the ship reaches Mandalay that you start to notice other visitors, those who have come from around the world to see famous attractions like the long teak U Bein Bridge and the ancient capital of Bagan. And while Myanmar’s best-known sites are definitely worth a visit, it turns out to be the modest moments—standing in a bustling village market or watching a line of monks collect alms on a dusty road at sunrise—that are its most enduring keepsakes.

With just 18 staterooms built for 36 guests, the Avalon Myanmar is one of the world’s smallest commercial river ships—and that suits the environs perfectly, because when you get off the ship you’re not heading into a capital city or even a bustling port. You’re walking a narrow gangplank over a muddy shore, and then ascending a sandy riverbank to discover a tiny village or a vibrant town full of people who are thinking about daily life, not tourism.

To be part of a small group is to find yourself in a singalong with kindergarteners in a one-room schoolhouse, or visiting with a grandmother musing about village life as she hangs laundry and tends her newborn granddaughter. Around here, a small group is like a small ship: It offers access to places the bigger ones can’t go.

Life on the Irrawaddy

The Irrawaddy is a demanding river, especially in the dry season when shallow water levels expose ever-shifting sand bars. Along particularly tricky stretches of the river, you can hear the recitation of river depths as crew members on the lower deck prod the river bed with long measuring sticks and relay the numbers in a meditative chant. Local pilots join the crew at points along the river, and after a day or two, you get a sense that to be on the Irrawaddy is to be, by necessity, constantly present and completely in touch with your surroundings.

Each evening, the ship pauses for the night. Watching the crew toss the heavy rope onto a sandy bank and scramble into the shallows becomes the dusk routine. Sailing during the day offers a gentle unspooling of river life and the rich chorus of rural Myanmar—monks chanting, children playing, motorcycles revving—as it drifts across the water.

The Irrawaddy River dolphin is headed toward extinction. Fewer than 100 of these creatures—which resemble the love child of a beluga whale and a stuffed animal— remain in the river. But the remaining few dolphins have forged relationships with the local fishermen, helping them to round up fish into nets in exchange for a cut of the piscine profits.

The dolphins are elusive, but just knowing they’re out there keeps the crew and passengers scanning the horizon. Word of a sighting spreads quickly—the ship will often stop to give people a better chance at a glimpse of the silver shimmer of wet skin as it arches through the surface.

To see a dolphin is to strike that first connection with the river, to understand it not just as an artery but as the true lifeblood of this region: a source of food, of water, of livelihood and, in the case of the dolphin, of a fading magic that lies beneath its waters.

RELATED: 8 Reasons Why You Should Go on a River Cruise

There are early risers, and then there are the people of Myanmar. Particularly in smaller towns, life here starts as early as 4:30 a.m. For North Americans, the extreme time change is an easy gateway to this sunrise culture. It’s certainly one worth dragging yourself out of bed for. For it’s these early morning excursions that yield incredible moments like watching the dawn almsgiving to a silent procession of burgundy-robe clad monks, or catching what has to be one of the world’s best sunrises in Bagan, where the darkness lifts to reveal a landscape of delicate silhouettes and a sky full of hot air balloons. 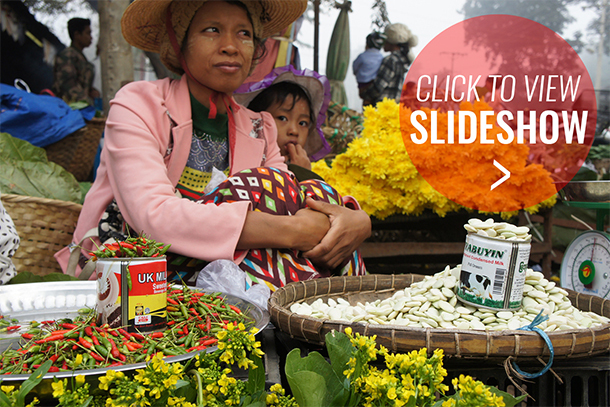 When, in 2011, Myanmar’s National League for Democracy and party leader Aung San Suu Kyi declared an end to the longstanding unofficial ban on tourism, they did so to encourage responsible travel that connected travelers to the people rather than the government. Aboard the Avalon Myanmar, this idea plays out in many ways each day. At each stop, the local crew of this Myanmar-built ship buys fresh provisions; it also donates food alms to local monasteries along the way.

The crew maintains strong relationships with the villages and offers monetary donations to local schools and communities at each stop. There’s a clear and constant effort to help villages benefit from micro-scale tourism without putting undue pressure on the traditional rhythms of life. And as the days go on and you grow more attached to the people of Myanmar, this becomes a vital distinction.

RELATED: Why I Hated Group Tours (Until I Tried One)

The World Beyond the Internet

Unsurprisingly, the world’s second-most isolated country is not a world leader in Internet access. While you can find a decent connection in an increasing number of hotel lobbies (especially in capital city Yangon), access in the rest of Myanmar is spotty at best.

Aboard the Avalon Myanmar, you may go four or five days utterly disconnected from Wi-Fi unless you’ve got the world’s best phone plan (and even then … ). After a day or two, though, most people aboard start to realize that this isn’t the time before Internet, it’s simply life outside of it.

Which really frees up time to scout for river dolphins.

Christine Sarkis traveled to Myanmar as a guest of Avalon Waterways. She has her fingers crossed that the people of Myanmar will benefit from the country’s current changes. Follow her on Twitter @ChristineSarkis and Instagram @postcartography for more advice about making every vacation the best vacation.