If you grew up in New Jersey in the 1980s and ’90s, you may have vague summer memories of a certain theme park nestled in Vernon Valley. It was called by its proper name, Action Park, or by its nicknames, Traction Park or Class Action Park.

You may feel a slight twinge of sadness whenever someone mentions its untimely end. You may have a hazy Polaroid of you swinging from a rope swing or cannonballing into a wave pool.

You may have read this headline and smirked to yourself, or looked fondly at a faint and faded scar on your wrist or knee.

And you may wonder how a park like this could ever exist, thinking to yourself, “Well, surely that could never happen again.”

Well, wonder no more. The world’s most dangerous water park is back.

Like many other residents of the Tri-State area, I have a warm, sun-soaked memory of Action Park from the early ’90s, when I visited with my family. My father, a man who steadfastly believes vacations should be as painful and cheap as possible, took the family for the day. (This is the same man who happily checked us all into a Florida hotel whose sole furnishing was crime-scene tape.)

I remember paddling around the water in inflatable swimmies and chasing unhappy ducks in circles, screaming and flapping my arms. My teenaged brother proudly proclaimed he rode the wobbly body slide 14 times without puking. It was a wonderful day. No one argued. I didn’t even cry when I dropped my egg-salad sandwich into the wave pool. The park seemed huge and shiny and new to me, although by then, it was already showing its age.

Its origins lie much earlier, back to a time when water parks were fairly novel, when regulation was lax and ride contractors still followed The Spaghetti Method: Throw things at the wall and see what sticks.

Enjoy the danger—and hairstyles—in this Action World commercial from 1983.

The park opened in 1978 to take advantage of the off-season ski-resort crowds in northern New Jersey. The first attraction was a 2,700-foot-long alpine slide, to which owners added several waterslides, a small, deep-water swimming pool, and a large wave pool. More and more attractions sprang up until, at its peak in the mid-’80s, Action Park boasted some 75 rides, a combination of water rides, thrill rides, and Go Karts, spread out on acres of scrubby grass and wooded hills.

The park was immensely popular, with busloads of New Jerseyites and New Yorkers flooding its gates each day (including my loudmouthed family and our brown-bag egg-salad sandwiches). They smashed into each other on bumper boats, thundered down body slides, and kayaked on a fake whitewater river. There was laughter and lemonade and suntans and denim cut-offs. Lots of denim cut-offs.

Its jingle promised that “There was nothing in the world like Action Park.”

That may have been because Action Park was an absurdly dangerous place, with a casualty count higher than a season of The Sopranos.

“The owners were not merely stupid but probably homicidal maniacs.”

The park wasn’t open long before injuries began piling up. When all was said and done, six fatalities would occur in the park, plus countless broken bones, concussions, and near drownings.

The amusement park earned its moniker from a number of factors: ill-trained teenage employees who ignored basic safety requirements, little to no state regulation, and ride designers who seemingly got their degrees from Roller Coaster Tycoon. The owners, according to a former park-goer, “were not merely stupid but probably homicidal maniacs.” Rides had physics-defying features and dangerously absurd elements.

Take, for example, the Cannonball Loop, now a symbol of everything Action Park once was.

Cannonball Loop was an enclosed waterslide, not unlike many you’ve seen and ridden. But this one featured a novel twist: a 360-degree inverted loop through which riders would shoot before landing in a long, shallow pool. In trial runs, Cannonball Loop supposedly dismembered test dummies; employees were bribed with $100 bills to give it a go. Surprising absolutely no one, a rider got stuck at the apex of the loop and required emergency extraction. Others got bloody noses or back injuries, prompting an absurd pre-ride safety measure that makes the TSA look hands off: Riders were hosed down with cold water and told to remove jewelry, shoes, and glasses, then instructed on brace positions in order to survive the slide’s impact.

Someone was paid to design this.

The ride finally shut down in 1995 for safety reasons (quite obviously), but not to worry: Plenty of other rides offered ample opportunity for catastrophic bodily injury.

A kayak ride (an imitation course in which freezing water frantically surged over submerged electric fans) was often so raucous that kayaks tipped over and spilled their human contents. Sadly, one rider was electrocuted because of the ride’s inane design. The park was cleared of wrongdoing and the kayak ride was deemed safe, but it never reopened, perhaps because someone realized that electric fans submerged in water do not operate at optimum levels.

The bumper boat and speedboat rides took place in a pond that, according to local lore, was infested with water snakes.

Even on land, visitors weren’t safe: Ride operators wedged tennis balls in the Go Karts to circumvent speed controls, leading to 50 m.p.h. bumper-car rides, according to Wikipedia. (The Action Park Wiki page, which lists all the rides and their sundry quirks, reads like a Defense Department casualty report.)

In the end, prosecutors decided—correctly—that water parks should have body slides, not body counts. Rising insurance premiums and lawsuit costs (not to mention new statewide safety legislation) added up, and eventually the owners declared bankruptcy. The park’s visitor numbers had tanked, its reputation tarnished, its grounds only slightly less dangerous than Pripyat. By 2000, a new owner purchased and gutted of its most dangerous rides and the park became a shell of its former self, running on just the alpine slide and a few other attractions. This reincarnation too puttered out, too, with those owners following suit and declaring bankruptcy.

Action Park seemed cursed, doomed to being a failed footnote in amusement-park history.

The Return of Action Park

In 2010, the once-dangerous park returned to its original owners, but it remained quiet, operating under the name Mountain Creek with little fanfare and few rides. However, earlier this year, Internet sleuths discovered that the URLs www.actionpark.com and www.actionparknj.com had been purchased, and in April, The Star-Ledger reported that Action Park would be reclaiming its infamous name. Many former park-goers rejoiced: here, a piece of childhood to be rediscovered and shared with a new generation.

A new sign with that infamous name was erected on-site. In June, new rides debuted, including a Zero-G water slide. Guests climb 99 stairs to an enclosed glass capsule, where a trapdoor releases and sends guests plummeting 1,000 feet down on a blue body slide. (One can assume that Zero-G, unlike its ancestors, was rigorously tested for safety.) 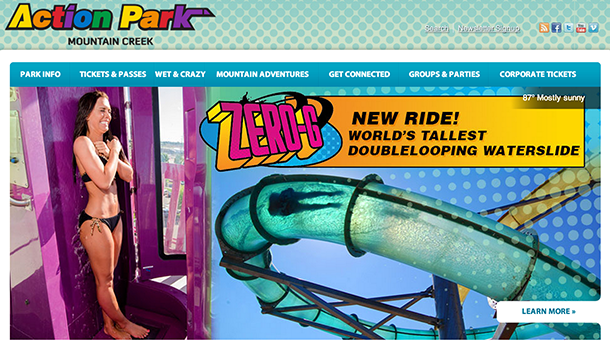 News of Action Park’s reopening was like a rickety trip down memory lane for me. Would I go again? Absolutely. I’d like to measure the newest version against my recollections. Last summer, I visited Hershey Park, another frequent haunt from my youth, and it was as magical as I remembered. Would Action Park, in all its dinky and duct-taped-together glory, retain the same charm of my childhood?

In its heyday, Action Park existed in something of a regulatory vacuum, but those wild, wild west days of thrill rides are largely over. Rides are built by just a handful of professional contractors. They are tested and inspected often. Employees are trained, and amusement-park casualties have fallen over the years. These days, according to the International Association of Amusement Parks and Attractions, your chances of being injured at a theme park are about 4.4 in one million.

So I’ll take my chances.

Besides, I heard there were never even water snakes in the pool. Imagine that.